€3000 Inflation bonus – Everything you need to know! 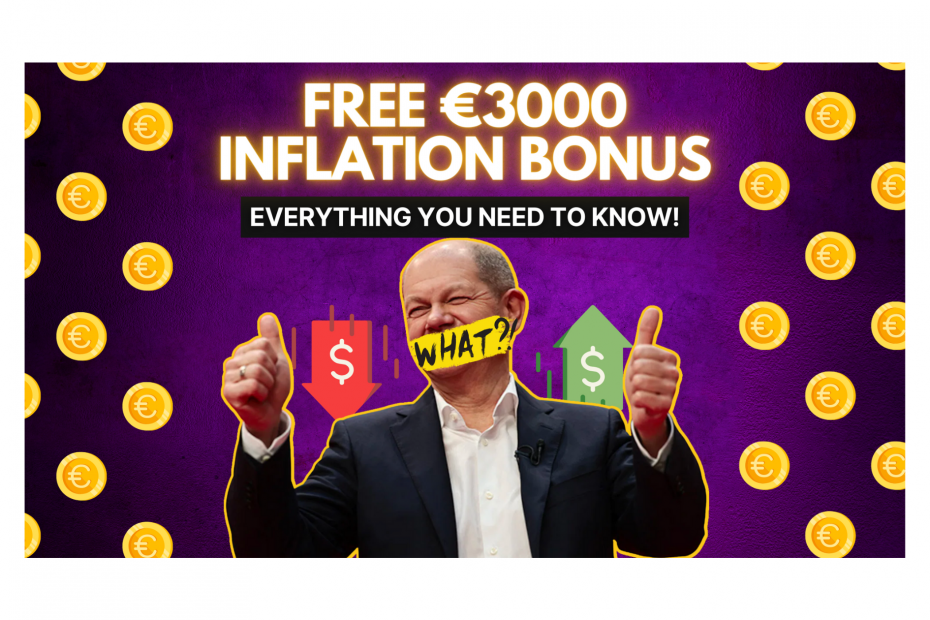 Germany has introduced a new law that allows Employers to pay a ‘tax-free’ inflation bonus up to €3000 to mitigate rising costs. Read the article to find out more!

To say that Europe is in a crisis, would not be an overstatement. Stock market is falling, real estate is plummeting, while costs seem to be on the rise. This is not just the situation in a few European countries, but in most countries worldwide. However, Germany is one of the countries taking active measures to combat the inflation crisis.

Inflation in Germany – What is the scenario right now?

Inflation has been on the rise in Germany. For October, the projection was 10.4%, which is a 0.4% increase from September. Especially, Energy prices, increased considerably since the war started in Ukraine. It has a substantial impact on the inflation rate. Energy prices were 43.0% higher in October 2022 than in October 2021. Food prices also increased by 20.3% in this period.

Inflation Bonus – How the German Government plans to help its citizens

Germany is one of the governments which is taking steps to help citizens. On 25th October 2022, a new post published on the Bundesregierung ( German Government’s Website) announcing an inflation bonus package of €3000 Euros.

In order to help its citizens cope with rising cost of living, the German Government has announced this inflation bonus of €3000. However, this bonus is not to be paid by the Government itself. Rather, Companies and Employers are the ones that should be paying this.

Along with such an announcement comes a lot of confusion and a lack of clarity. Questions such as, ‘Am I eligible?’ ‘How can I collect this?’ ‘Do I need to pay any taxes on it?’ are creeping up in people’s minds.

Should all Companies and Employers pay the inflation Bonus?

No! All employees are not entitled to the bonus. The Government announced that the inflation bonus payment is not mandatory for all companies and employers. However they can support their employees with up to €3000, free of tax and social security contributions – on a voluntary basis.

How long do I have to collect this bonus?

The inflation bonus is part of the third relief package. The package has an expiration date: the Bonus remains tax and social security free only if the employer pays it out between October 26, 2022 and December 31, 2024.

What conditions to meet in order to incur ZERO Tax?

The most important requirement is that the inflation premium is to be paid in addition to the wages that are owed anyway. For instance, the bonus amount cannot be deducted from GROSS SALARY as it is done with other bonuses.

Can employers pay the inflation bonus in kind?

Yes! Employers can pay the inflation bonus in non-cash incentive forms. Anything that relieves employees from the inflation qualifies. For example, Fuel Voucher, Meal Coupons.

Can employers pay in Installments?

Yes! Companies performing now can pay a portion of the bonus now and the rest within 2024.

Does the inflation bonus also apply to students and trainees?

Companies often treat Students, and trainees as ‘non-employees’. This should not be the case as the Government clarifies that they are eligible for the inflation bonus too. So if you are a student in Germany working part-time, this is great news for you.

So these are some of the frequent questions about the Inflation Bonus!

At crisis time, with increasing costs, this bonus would really be helpful for the citizens of Germany. This is also a clear evidence as to why German Government is once again proving to be the best in taking care of its people.

Would you prefer to watch a video on this topic? Check this out!

Investing your money is essential to protect yourself from the inflation. For more blogs on Investing, check out our website

open your depot with Scalable capital here and start investing!